Finding real value in today's market isn't easy.
So we did it for you!
40 catalyst driven ideas for the year ahead 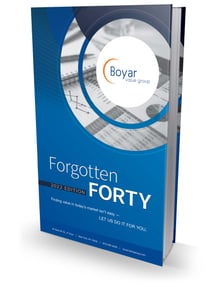 Every December, for almost three decades, Boyar Research publishes The Forgotten Forty, which features one page reports on the forty companies that we believe have the greatest potential to outperform the leading indices in the year ahead due to a catalyst that we see on the horizon. All companies featured in The Forgotten Forty have been previously analyzed in full length research reports in our flagship publication Asset Analysis Focus.

Each purchase of the Forgotten Forty also includes the next two issues from Boyar Research. You'll receive both our upcoming February and April issues. Each issue features three in-depth reports on companies that we believe to be intrinsically undervalued. You’ll receive a  copy of each issue as soon as it is released.

WHAT OTHERS ARE SAYING

“Boyar’s Forgotten Forty is an excellent filter for stock pickers as they narrow their hunt.”

“It’s been 15 years since I received my first edition of the Forgotten Forty, and I’ve never been disappointed…There is no doubt, Boyar has added ‘alpha’ to my clients’ total return over the years.”

Have questions? Book a meeting with us today.

Since 1975 the Boyar family of companies has focused on creating value for our clients — by seeking out and investing in companies whose intrinsic value significantly exceeds that of its current market price.